Our amazing School opened its doors in February 1983, with just 53 students and by the time the first official school photograph was taken later that year, we had 74 students and nine staff members including Linda Zurnamer, now the grandmother of Year K student Stevie Zurnamer and her brother Finn, in Kornmehl Pre-school.

A number of students who were part of our first intake in 1983 have had their children as students at the School for some years already, and joining them this year we welcomed Jonah Symonds, great grandson of Co-Founder and first President of the School Board, the late Ted Waxman OAM. Jonah’s mother, Ilana Symonds (Waxman), and father, Adam Symonds, are both Emanuel alumni, Class of 2004 and 1999 respectively. Ilana’s parents, Tracey and Leon Waxman, have been part of this School for what they describe as a lifetime. Their son, Asher, finished Year 12 in 2009 whist their youngest child, Aliza, finished Year 12 in 2012. 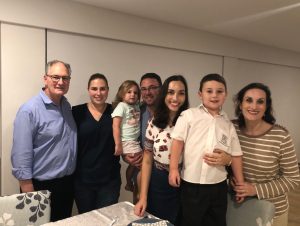 Having such love and commitment to the School beyond this time, Leon has continued on as part of our amazing Parent Safety Group and we hope he will continue to do so for many more years to come. Ilana said: “For me, I feel like I’ve come home! When I used to walk through the school gates as a child, I always felt very safe, happy and so nurtured. It’s a wonderful feeling to know Jonah will feel the same in his school experience. It’s so beautiful to look around the grounds and see my own memories of my childhood come to life! So incredibly special to relive those happy times through Jonah’s experiences now.”

Another family with a long association with the School who return this year are the Drexler family. Paul Drexler, whose two daughters Julie and Michelle are Emanuel alumni, is a Holocaust survivor and has donated prizes for High School Speech Night for many years for the Eugen Drexler Memorial Essays. I’m sure many of you will remember when, as a Year 10 student, you too prepared and wrote one of these essays.

The Eugen Drexler Memorial Prize was first awarded more than 25 years ago to a Year 10 student for proficiency in History. In 1998 it became the Eugen Drexler Memorial Prize for Excellence in Holocaust Studies. Some years ago the essays were expanded to include two further subjects to give Year 10 students a wider choice – not only could they interview a Holocaust survivor, they could interview someone who has immigrated to Australia under adverse circumstances or someone who has made a significant contribution to Jewish Community Life. Paul Drexler has now returned to the School as a grandparent and said: “It is wonderful to see my granddaughter Maya following in my daughter’s footsteps”. Paul’s daughter, Michelle Levitt (Class of 2000), said that “it is really great being back at Emanuel and seeing our daughter Maya absolutely love starting Year K. I think it is very unique how the feel of the School hasn’t changed since I graduated despite the School going through so much growth and development”. 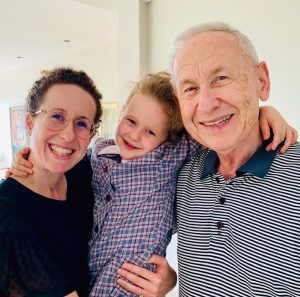 We welcome Claudia Sceats (’09) back to School this year as a Year 3 classroom teacher. 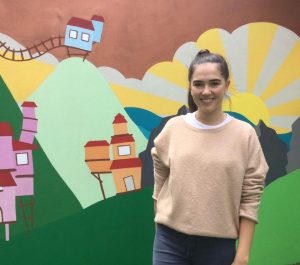 During online learning many of our Primary students sent “thank you” wishes to their teachers – here are two lovely messages sent to “Ms Sceats” and “Ms Hynek” (’08): 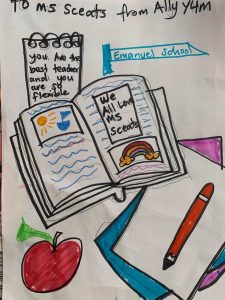 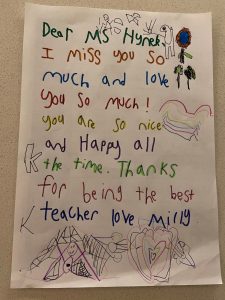 2020 has seen many other children of alumni start as students here at the School – we welcome you all back to School, and we look forward to sharing some of your stories and photos too.

Previous Article Where are our Alumni now?
Next Article An Artist amongst us