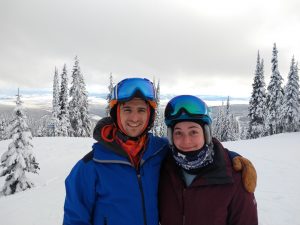 After High School I took two years off studying to travel and indulge other passions. I spent most of that time working and travelling my way around the USA and Canada. I have always loved skiing and was able to half fulfill – we’ll get to the other half in a bit – a lifelong dream of mine: to live in a Canadian ski resort and ski all winter. I did this at the then fairly unknown ski resort of Sun Peaks in British Columbia (BC), Canada, a place I would return to several times and later call home.

After this two year break I did decide to go to university where I pursued another great passion of mine, Science, in particular Chemistry. I would study for nine months a year at UNSW, then return to Sun Peaks for our three month summer break to keep trying to ski every day. It was at UNSW that I met my partner of over seven years and counting, Bec.

After completing my Honours in Chemistry and being offered exciting scholarships to continue my research in the form of a PhD I jumped at the opportunity. Unfortunately as happens to many PhD candidates, I burned out and realised I didn’t want to go so deep into my specific field, and so about 15 months in I made the difficult but ultimately important decision for my mental wellbeing to call it a day on my academic path. 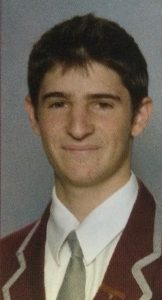 Unsure of what was next, Bec suggested we go to Sun Peaks for a year or so. She loved skiing too and wanted to experience it for herself given how much I had talked it up over the years. So, in late 2016, we made the move from Sydney to the other side of the world to go and ski. After that first winter back there I knew I couldn’t leave yet. I convinced her to stay and we’ve been here ever since.

The real life long dream was actually to live in a Canadian ski resort where I can ski all winter and golf all summer. This is Sun Peaks. This is more or less what I have done for the last four years. It is also a mountain bike haven which is a great bonus for me. For these four years I’ve worked for Sun Peaks Resort as the manager of a local ski shop in the winter and the golf pro shop in the summer – a great gig for someone who loves these sports and the gear as much as I do.

Sun Peaks is about 4.5 hours drive from Vancouver, right in the middle of British Columbia where there are very few people. This also means very little pollution, both the regular kind and light pollution. It’s been an incredible location to indulge in another hobby, astronomy, in particular astrophotography which has consumed my life and destroyed my sleep cycle. It’s a very tough but extremely rewarding hobby when it all comes together – not unlike golf.

Having fulfilled the dream, Bec and I were looking for something more than this fun but ultimately very very small town could provide. She was offered an incredible position to follow her main passion – food chemistry – back in Sydney and as I write this in late September we are one month out from moving our entire lives back across the world, this time with our two dogs. So, I once again find myself in the position of ending one chapter without any real plans for what comes next. It’s a scary, but familiar feeling. We’ll see what’s next…

Unsurprisingly my fondest memory of Emanuel was our Year 9 Ski camp. At this time I already loved skiing and it was a great time getting to do my favourite activity and show off to all my school mates. More than that the vibe on that trip was different to any other camp or excursion before or after it. Everyone was just so happy for that one week. People you maybe weren’t great friends with became closer and somehow more approachable. You got to know the teachers much better. Just an amazing departure from normal life. Perhaps another reason I sought it out as my normal life.

I’m still in contact with a small number of my school friends. Incredibly there were up to five members of the Class of 2008 all living in British Columbia within about five hours of each other for a time. That number sits at four currently and will drop to three in a month. It’s been a fun and unlikely scenario to catch up with so many school friends about as far away from the school as possible. As for Emanuel friends back in Oz it’s been a little tougher, but I have kept good contact with a few and I’m looking forward to rekindling those friendships now that I have returned and am out of hotel quarantine. 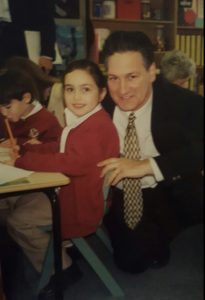 Aliza with her father, Leon Waxman

After Year 12 I went straight to university and studied a Bachelor of Media Arts at UNSW Art and Design. I did manage to travel in my semester breaks and catch up with friends who were on their gap year.

I finished my course and really loved it. It was very interesting and definitely opened up my eyes to the many possibilities in the creative industries. I loved having access to camera equipment, studios, lighting, dark rooms and all sorts of facilities.  We were so lucky because booking and hiring these things are very expensive now, so I am definitely grateful for the opportunity we had to experiment and learn.

The most pivotal part of my degree was my practical placement.  I worked on a local feature film in the production department. It really inspired me to want to pursue producing. From then on I had been gaining experience on productions by working my way up in roles with different responsibilities. Fast forward a few years and I am finally a Producer! Today I work for 90 Seconds, a global video production company. I work with a team from all around the world and create video content for some of the most exciting leading brands.

Music is one of my passions and currently I am in a fabulous children’s music group called Hawowow, headed up by Ilan Kidron. We have just launched and written many fun and educational children’s songs. I have an acoustic band called Brooklyn Bear, also managed by the fantastic Ilan Kidron (thank you Ilan for believing in me and being a great mentor). I also have a Jazz band called 33 Degrees, created in high school with my best of friends Sam Weiss and Ben Feher. Our first ever gig was the School Open Day and we are still gigging together 10 years later! Thank you Emanuel for giving us the encouragement and platform to perform and grow musically. 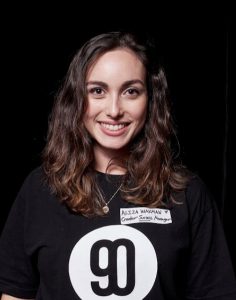 All my memories of Emanuel School are fond memories. I went all the way from Pre-school at Kornmehl to Year 12. Some teachers saw me grow up the whole way through. Now I realise having that kind of support and nurturing foundation is very rare. Having a small year group who mostly also grew up at Emanuel, meant I made lifelong friendships with people who are like brothers and sisters to me. Some of them I live with today as housemates!

As for COVID-19, the only thing that has affected me was moving to working from home. However, businesses are needing video content more than ever as everything is online! We also needed to adapt to the growing demand of solutions like Live Streaming and Remote Directing. When we were in lockdown and couldn’t shoot live, we did a lot of animations for companies still needing to produce content.  In terms of my future plans, I hope to continue to learn and progress as a film producer and to make music!!